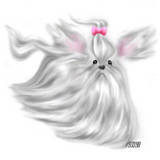 Imperial Shih Tzu have very few health issues but I have listed the ones that people may have or may not of heard of. My goal here is to dispel the myths concerning the health of the Imperial Shih Tzu.

There are many myths involving the health of Imperial Shih Tzu commonly known as the Chinese Imperial Dog. Most of these are unfounded. This article will address the most common ones and dispel the myths.

An umbilical hernia is a small bubble like protrusion of fat at the navel. This is very common in the breed as the Imperial Shih Tzu has a flat face with an under bite. This does not allow the dam to cut the cord with her teeth. The breeder must cut the cord for her. If the cord is tugged on excessively it will cause an umbilical hernia. Most are very small and will close over time as the puppy grows. This can take up to one year. Some small ones do not ever close. This is not a cause for concern and will not effect the health of the dog as long as you are able to push the fat back into the hole. If the bubble becomes hard or the hernia is quite large you should have it surgically repaired. A great time to have this done is when you spay or neuter your pet.

Your puppy may have snorty sounding breathing. This may be caused by tightly closed nostrils. This is called pinched nostrils. When your puppy is teething, it causes the gums and the lining of the nostrils to swell. They may also have a clear discharge coming from the nose. This clears up after the adult teeth grow in. As long as the puppy is eating, drinking and playing normally then the puppy is just fine and healthy. If the puppy is not eating or playing then there may be and infection and should be seen by your Veterinarian.

Reverse sneezing is when your puppy seams to be unable to breath easy and making a honking or snorting sound. The cause may be allergies, nasal irritants or even nasal inflammation. Also a slightly elongated soft palette can suck against the throat when inhaling. This can be a bit alarming to witness as it seams that the dog is not able to breath. This is actually very common in the flat nosed and toy breeds. Reverse sneezing is not life threatening and will last a very short time.

Sometimes the smaller Imperial puppies will mature slower than the larger Shih Tzu and will have an open fontanels longer. This is will most likely close as the puppy gets older. This does not predispose the dog to a condition called hydrocephalus. However, the puppy should be protected from hitting it’s head as this could cause injury or death. 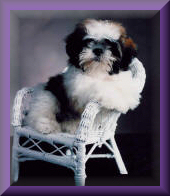 In our tiny dogs hypoglycemia or low blood sugar is a very common problem. Signs of hypoglycemia are a wobbly gait, confusion, lethargy and if it is allowed to progress without treatment can even lead to seizures. Tiny dogs suffer from this more often than the larger breeds. This is due to their larger brains and smaller livers compared to their body size. Also in the way that the smaller dogs process blood sugar. The larger breeds use blood sugar stored in their muscles. Our tiny dogs get their blood sugar directly from the blood on which their larger brains are completely dependant. Puppies are at a greater risk of hypoglycemia and should be fed at least a minimum for 4 times a day with small snacks. The puppy should grow out of this but should never miss a meal even as an adult. A stressful situation, such as a trip to the groomer or Vet. can also bring on an attack. To prevent this have a product called Nutri-Cal or even Karo syrup on hand at all times. This will help bring up the blood sugar. You may also want to give your it to your puppy at bedtime and first thing in the morning. Get to know your puppy’s signals and you should be able to prevent all issues with hypoglycemia. Your tiny dog should able to go on to live a perfectly healthy life with only the slightest adjustment in their feeding schedule.

Many people unfamiliar with our precious breed have alarmed new comers to the breed unnecessarily. The Imperial Shih Tzu also known as the Chinese Imperial Dog is quite a healthy little breed and will make a wonderful pet without concern for it’s health.

Karen Christensen has been breeding the Imperial Shih Tzu for over 20 years as of 2008. She is a key person in the founding of the Chinese Imperial Dog Club of America and helped to write the breed standard. She also served as the Secretary for this club for 18 months and was a key founder for the Imperial Shih Tzu Information Society; the definitive place for the pet owner to get information about the breed.

Karen Christensen was a great supporter of the Imperial Shih Tzu and Chinese Imperial Dog and the owner of Eaglegate Shih Tzu. RIP. We miss you!